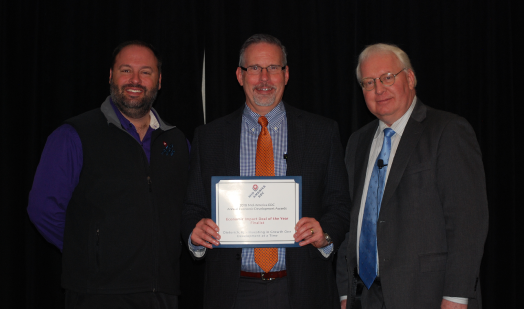 Accepting the award on behalf of the Village of Dieterich is Bill Teichmiller, CEO of EJ Water.
Congratulations to the Village of Dieterich on being the runner up for the 2018 Economic Development Awards presented by The Mid-America Economic Development Council! The awards were given at the 2018 Mid-America Competitiveness Conference & Site Selector Forum, held in December.
Award entries were accepted in two markets per category – large division (community population over 50,000) and small division (community population less than 50,000).
In the Economic Impact Deal of the Year category, the Village of Dieterich was recognized in the small division (community population less than 50,000).
To be recognized in this category, there must be a project having significant and measurable impact on a City, County and Region. The project must have already broken ground and be in the initial phase of implementation between January 2017 and June 2018. The measurable impact can include capital investment, jobs, supplier network, economic impact or new partnership initiatives that positively improved the community.
The Village of Dieterich's application was named Investing in Growth One Development at a Time, and was based off the Hartke Subdivision Development. Learn more about the development and to view the Hartke Subdivision Narrative submitted by Craig Nielson, with The Alliance, or view the press release.

HAVE A QUICK QUESTION?

We'd love to help you out. Just fill this simple form out and we'll be in touch!

Account specific questions can be answered by contacting Customer Care at (800) 699-9766 or by using the ‘Contact Us’ link within Online Banking.

Someone will be in touch with you soon.

Stay up to date with our news, alerts, and community events!